This website uses certain Blogger and Google cookies, including use of Google Analytics and AdSense cookies, and other data collected by Google. By remaining on this site, your consent is implied.
January 16, 2017: Just as I predicted would eventually happen (back on December 16, 2014), the Australian Transport Safety Bureau (ATSB) has ended their search for the MH370 plane crash wreckage in their search area without ever finding MH370 in it: Underwater search of 120,000 square-kilometre area in the southern Indian Ocean completed. Wreckage of Malaysia Airlines flight MH370 not found there. Malaysia, China and Australia announce decision to suspend the underwater search. "Paul Kennedy, the project director of Fugro – the Dutch company leading the search – acknowledged on Thursday [July 21, 2016] that, if the plane was not found there, "it means it's somewhere else"." 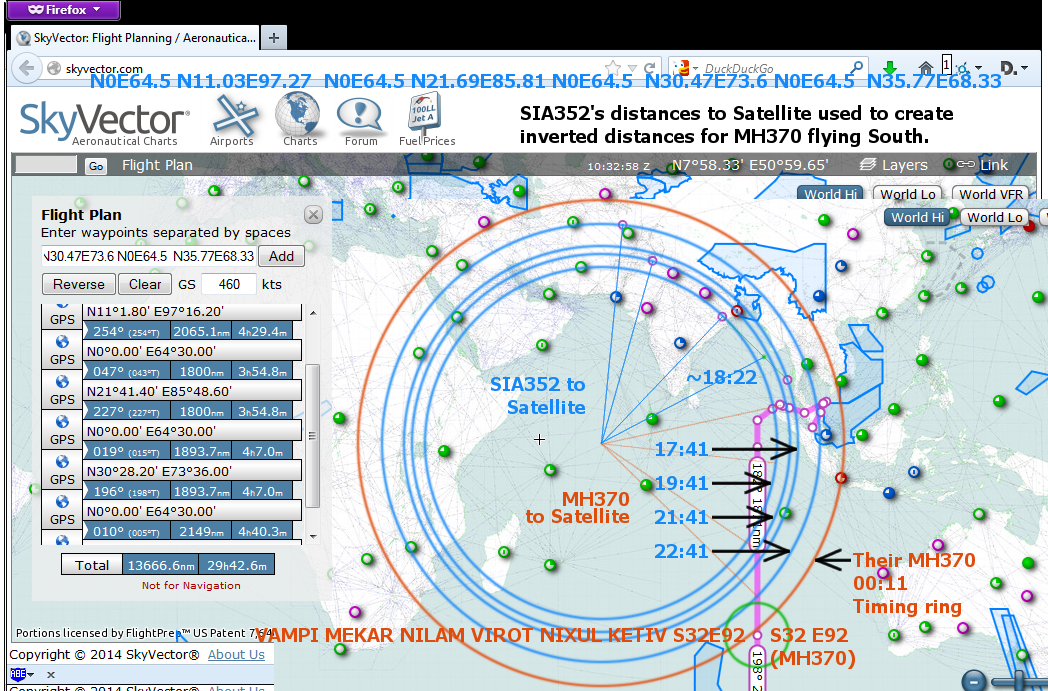 Hover over image to open it in a larger view.

I estimated the radii of the Inmarsat Timing Rings, then looked for any airplane that might have a correlation with the circle at 22:41 UTC.

SIA352 correlated with their 19:41, 21:41, and 22:41 UTC circles, flying North. I plotted SIA352's distances to the satellite, then mirror flipped and rotated those distances, to estimate where MH370 would be, heading South.

Note: I am not saying this is in fact where MH370 is. I am presenting this as one possibility, based on what the Investigators have stated as facts in this case, and based on my estimates of the Inmarsat Timing Rings. Inmarsat has failed to provide the radii of their circles.
Posted by Anonymous at 10:43 PM

I am using comment moderation and word verification to prevent spam. If you want to provide information, but remain anonymous, please state that at the beginning of your comment, and I will not publish it.

I appreciate any useful information relevant to the disappearance of MH370.

The intention of this blog is to provide facts and links from reliable sources, posts of some of my own research that is based on facts that are in the public domain, and links to theories, information, and opinions from others about the disappearance of MH370 on March 08, 2014.

The inclusion of information on here (i.e. eyewitness reports, etc.) is to provide a complete picture with regard to MH370, and does not mean I am endorsing everything on here as true. I am trying to remain neutral and allow readers to use the information on here to form their own opinions.

Information is being added to this blog over time. Some of the existing links and/or subsections on the right get moved around, but I will not delete any links. Although some of that information might become obsolete, it still provides historical information about the search for MH370.

I am not seeking any attention for myself, which is why I am remaining anonymous.

"Open-source information isn't classified and may look like nothing more than innocuous bits of information, a piece here, a piece there, like pieces of a puzzle. But when you put enough of the pieces together you begin to realize the bigger picture and that something could be going on." Maj. Ray Ceralde, the Army OPSEC program manager, 2007

Reward MH370: The Search for the Truth